I’ve been a Sherlockian for as long as I can remember. It was Jeremy Brett, in the mid-1980’s who portrayed the troubled genius to such perfection who sealed the deal; although I fondly remember the Basil Rathbone movies as well. Of course I haven’t just watched dramatisations, I’ve also read all the stories several times. There’s a reason they stand the test of time; Holmes and Watson are great lead characters and the stories are always intriguing, the reveals enjoyable. I don’t remember ever feeling cheated by Conan Doyle.

I also love the modern interpretation that has made Sherlock ‘a thing’. From the moment I first heard the news, I was anticipating the first episode. I happy squealed when casting was announced (Martin Freeman as Watson – perfect!) and enjoyed all three series so far; just not the wait for season 4.

So when I saw that York Theatre Royal had an adaptation of The Hound of the Baskervilles as their summer production, I asked my husband if we could go. He was a bit reluctant, but after reading some of the reviews and saying things like, ‘You do realise that Watson is a woman?’ and ‘You do realise it’s a comedy?’ he booked us tickets. 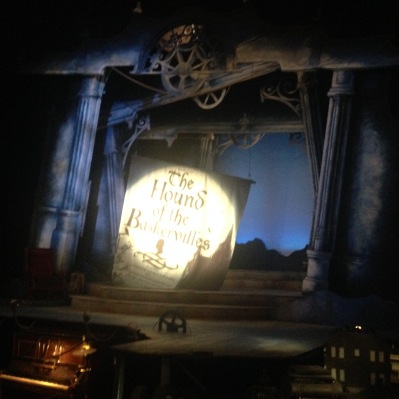 I think, if I had to give a recipe for the perfect night of fun for me, it would be something like what we watched last night. Sherlock Holmes, Vaudeville with a steam-punk vibe, shadow puppets, silliness, and utterly flawless live performance.

This is the story of The Hound told in a wonderfully self-aware melodrama. The carefully choreographed chaos, with the cast of six performing multiple roles, costume changes and physically moving the scenery there was a lot going on. All six performers were brilliant, assured, and clearly loving what they were doing.

The Hound of the Baskervilles is on at York Theatre Royal until the 27th of August. Book now, before it sells out.